How fast can Morkies run?

Morkies can run at a top speed of 20mph. This speed comes from their Yorkshire terrier heritage. Yorkshires were working dogs before they became companion dogs. They were brilliant ratters, seeking out vermin and chasing it down. Morkie’s are very alert, energetic, and active because of these parental genetics.

This is a surprising statistic when you consider the little legs on this animal, but not when you consider their keen spirit and determination. This speed has some advantages in different vocational and recreational disciplines. But, you have to be careful not to let Morkies run too far too often – and to watch out for any prey drive kicking in.

Morkies are fast. Morkie owners must appreciate the significance of this speed and how to make sure they don’t take advantage of it. This means getting a better idea of why Morkies can run so fast, the best ways to utilize this talent, and how to provide the best exercise regime for the well-being of their pet.

Please keep in mind the speed these little buggers possess as they will most likely try to get out the door when you try to leave, this can be a very big problem if you live in an area that has any traffic.

Luckily living in an apartment building lots of escape attempts from Bella have only led to my wife and I devising plans to corner her in the hallway not having to worry about outside dangers.

Are Morkies one of the fastest dogs?

Morkies are speedy little animals and their top speeds are much faster than you would expect. Relative to their size, they are one of the faster dogs. The healthier the animal, the faster it will run. However, other breeds can reach even higher speeds than that.

The fastest dog is the greyhound which can hit 40mph and sometimes more. Of course, that is why greyhounds were so popular for hunting and racing. Their lean bodies are made for speed. Other working dogs like Vizlas are also pretty fast when they need to be. Then there is the Jack Russel Terrier. This dog is similar to the Morkie in that it is much faster than you would expect, and for the same reason.

Why are Morkies so fast?

The reason that Morkies are so fast actually relates to the greyhound. It all comes down to the reasons their ancestors were bred. For greyhounds, it is the ability to chase larger prey like rabbits across open land. It is also why they are so agile. For Morkies, this speed comes from their Yorkshire terrier heritage.

Yorkshires were working dogs before they became companion dogs. They were brilliant ratters, seeking out vermin and chasing it down. Morkies may not need to follow in these footsteps, but they have the pace with which to do so.

Should you let Morkies run for exercise?

There are some conflicting ideas about letting Morkies run around for exercise. Some people say that the animal should walk and engage in less strenuous activity. This is largely because they don’t need that much exercise per day. A short sprint will tire them out quickly and they might not have the energy for much else.

On the other hand, there are those that encourage running and sprinting now and then because these dogs clearly enjoy it so much. They want to run around, especially if the activity is part of a game with the rest of the family. Moderation is important here. It is all about letting them exercise enough to burn off all that energy without taking it too far.

Also, it is important to remember that this hereditary ability to run and chase vermin may lead to a bit of a prey drive in these animals. You could end up letting your Morkie off the leash to run around and seeing them bolt off after a wild animal. The last thing you want to do is cause a disturbance to the local wildlife – or kill it.

Is it bad for Morkies to run too much?

There are dangers in letting Morkies run too fast, too far, or too often. This activity is great for letting dogs burn off restless energy and calories from their protein-rich food. However, too much exercise could pain undue strain on their bodies. They may become tired and unable to walk back home.

They may also struggle with their energy for the rest of the day. Running also poses risks of injury because of the speed and repetitive motion. Be careful where you let Morkies off the leash so they don’t stumble on rocks or down rabbit holes.

What are the best forms of exercise for Morkies?

Running can be fine in short sessions. Instead of leaving your dog to go crazy in a dog park or out in the countryside – where they may do more harm than good – consider staying in a penned backyard or engaging in a more controlled activity. The social side of these companion dogs means that they will enjoy playing games with the family. Games of fetch are perfect for bursts of energy, a chance to use their brain to find the ball, and for the gratification that comes in bringing the ball back to you.

Smart dogs like Morkies can also thrive with activities like obedience training and agility. You can work together to learn how to overcome obstacles in your backyard, like ramps, small jumps, and tunnels. Also, the time trial aspect of this activity means it is another way to make use of their speed in a controlled manner.

In short, while Morkies aren’t the fastest dogs in the world, they can move pretty fast for such a small animal. This top speed of 20mph is why their ancestors were so good at hunting vermin and why these Morkies are perfect for speed runs on agility courses and high-octane games of fetch. You can make the most of this skill as long as you don’t push them too hard and risk fatigue or injury. Figure out when to run, when to play, and when to rest. 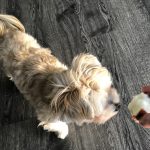 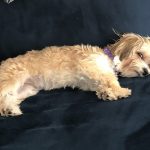 Can Morkies be left alone?

Why do Morkies change color? 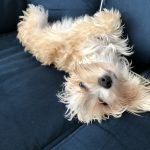 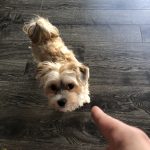 Are Morkies easy to train?

This is a list of products that I use or have been recommended and have found to be a great combination of cost and value. 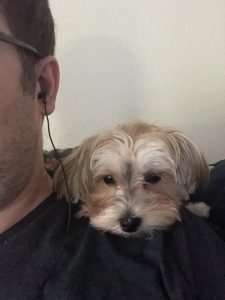 Hi, I’m Joe and that is Bella(my co-author). My wife and I bought her about a year ago. It’s been a lot of fun caring and learning about our new puppy but we definitely have had our share of growing pains along the way. I hope to connect and help other Morkie owners in taking the best care of their tiny energetic fur balls because they are a handful for sure.

Mymorkie.com is a participant in the Amazon Services LLC Associates Program, an affiliate advertising program designed to provide a means for sites to earn advertising fees by advertising and linking to Amazon.com.